So Swazi Observer editor Mbongeni Mbingo demonstrated his usual hypocritical conduct by organizing a discussion with United States Ambassador to Eswatini Lisa Peterson where King Mswati was heavily criticized for his extravagant spending without being defended even by his own newspaper or a Government Spokesperson?

It worth noting that even though Her Excellency the Ambassador raised genuine issues of public interest  regarding the huge expenditure, as independent journalists , we are deeply concerned with the conduct of Mbingo who sold the integrity and independence of the media to the State and now he is betraying the very same King who feeds him. My position is publicly known that I am against the conduct of the King whose lavish lifestyle has forced over 700 000 citizens into poverty but we need to avoid being selective by focusing more on King Mswati, leaving other ‘vultures’ like Bingo to manipulate the weakness of the system for their own benefit, this is the most corrupt hypocrite in the history of eSwatini media.

Perhaps, let me clarify that Mbingo’s over E50,000.00 salary is paid directly by Tibiyo TakaNgwane, he was recruited from the Times to be a ‘chief propagandist’ as managing editor of the Swazi Observer but then it seems the King is now on his own as ‘Bingo’ ignored the attacks by the US directed to the King and focused on MPs who are fighting a genuine matter of public interest regarding the grabbing of properties through the selective enforcement of the provisions of the Prevention of Organized Crime Act(POCA).

As Chairman of the Eswatini Editors Forum (EEF), Mbongeni Mbingo has never condemned the persecution of independent journalists in the Sub-Saharan Africa region not to mention eSwatini where the perpetrators are paying his salary and he enjoys many financial benefits from public companies with links to politicians.

But then, we had accepted that and even warned international organizations neither to expect any vibrancy nor even a Tweet from Mbongeni Mbingo and his gang meant to defend media freedom in the country. The police openly confirm that they were given a green light by the Editors Forum to torture independent journalists hence we rely on international journalists to fight for our rights as the media merely because the ineffective Editors Forum is being used by Mbingo for his own selfish gain.

But then, we didn’t know that Bingo’s love for money will force him to sell even the King, allowing the US Ambassador to attack him without defending him or at least invite Government Spokesperson Sabelo Dlamini to be part of that discussion and defend the King or justify his extravagant spending.

As mentioned, I am one of the few journalists who criticize the King, but it is important to have balanced opinions where those who are criticized are given a platform to respond to the allegations levelled against them, that is fair journalism and Bingo is aware of that. How can Bingo organize or agree to be part of a live discussion where serious political issues touching on our country and the King will be discussed without the presence of a Government Spokesperson to clarify some of the issues? The ground was not level as there was no one representing the government in their discussion.

It is important to mention that, in as much as we criticize the King on issues of extravagant spending, abuse of power and corruption, it is wrong to subject him to injustice by raising issues in a platform where he or those speaking on his behalf cannot respond. This is a discussion with the United States of America (USA), an influential country in the world hence sentiments or comments made will automatically impact social, economic or even the political landscape of the country. I have mention this before that Mbingo’s hypocritical conduct remains a serious danger in this country, he doesn’t conduct himself as a respectable editor but always side with those who can sponsor his lavish lifestyle, he is a dangerous hypocrite.

Even during the discussion, he was strategically sitting next to the Ambassador because to him it’s about showing the world how powerful he is in the country, it’s just a matter of time before we fully understand Bingo’s personal interest in that discussion. The public should note that the controversial question about the purchasing of the Rolls Royce was strategically asked by Thandiswa Ginindza who now works as the Communications Officer for the US Embassy, that’s how Bingo and his gang operate, he wanted to shift the blame when questioned by his employers(Labadzala) about the issue saying it was Thandiswa who raised it. How can the US Embassy organize or agree to meet editors, only to watch as the very same Embassy asked itself questions?

Journalists by their nature are known for asking hard questions as part of demanding transparency and accountability, they don’t invite or facilitate a discussion for you to ask yourself questions. Therefore, what happened at the Embassy was very strange but some of us who understand Bingo’s hypocritical games understood what was really happening.

The truth is, Bingo has messed up the media industry and now creating confusion that would create trouble for the country.

Editors by their nature should be journalists of integrity, their writings or analyses should give proper direction to the country and advice to those in power, but it is important for them to remain independent. Bingo is always vocal, accusing trade unions who are fighting for a Cost of Living Adjustment(COLA) of plotting a regime change, he did that to please those who pay his salary and we have no problem with that, after all, one of his duties is to be a propagandist.

But then, why did he failed to defend the King from criticism by the US envoy who was sitting next to him, only to arrive in the newsroom and attack MPs who are defending the public from the POCA political thugs.

The King is under heavy criticism from independent journalists and the international community for his extravagant spending, however, we need balanced criticism and those defending him should be given the platform to justify his actions. It was therefore unjust for Bingo and his gang to organize a discussion with the US Ambassador meant to attack the King in his absentia or without the presence of those speaking on his behalf.

In conclusion, let me warn that the social, economic situation remain at a critical stage and people like Mbingo should stop playing their hypocritical conduct at the expense of the people by aligning themselves with bread that is buttered, we need editors who will genuinely give directions and provide solutions to the challenges affecting this country.

As editors we must be objective and also promote diversity of views, people should be free to criticize us. I maintain that the discussion between that ‘Boys Club’ calling itself the Editors Forum and the US Ambassador was an act of injustice for the King who was not given the right to respond or clarify the issues that were raised. 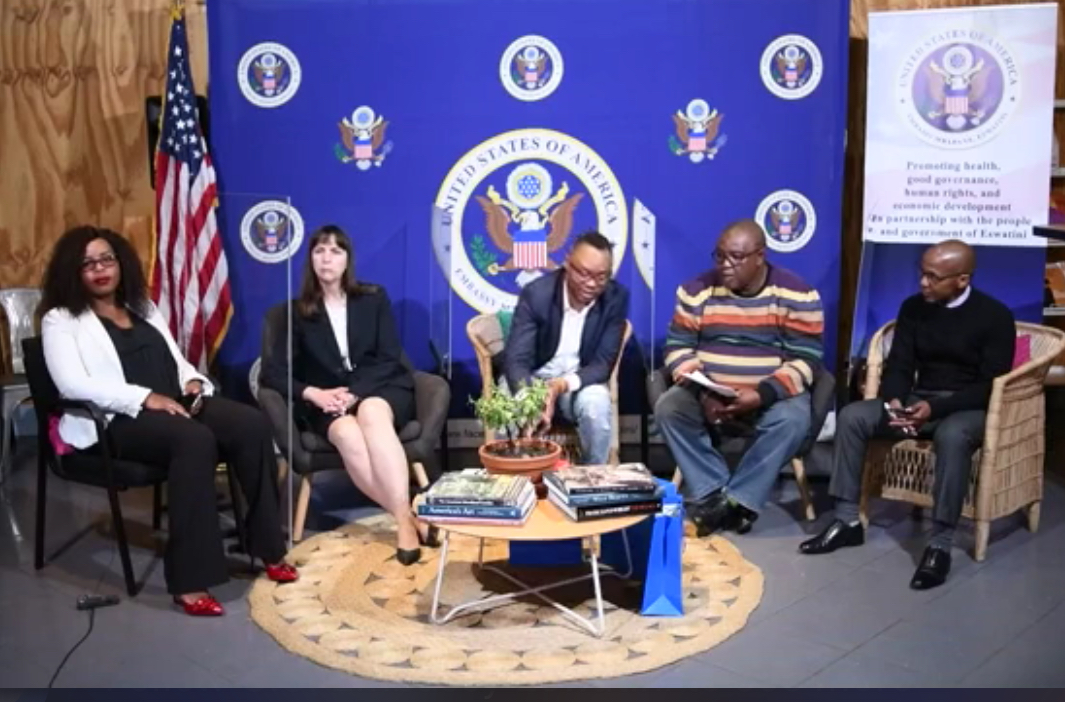 US Ambassador to Eswatini Lisa Peterson with editors