New students Union President calls for unity of progressive forces in the fight for social justice.

MBABANE: Xolani Maseko, the newly elected President of the Swaziland National Union of Students(SNUS) has called for the unity of all progressive forces in the country in the fight for political, economic and social justice.

Speaking to this Swaziland News in an interview on Sunday, Maseko who takes over  the hot seat in the midst of a scholarship crisis in the country said as the new Executive, they will work with various political parties to fight for the rights of students, he urged leaders of the progressive forces to guide and advise them as they were new in office.

“As the new leadership, we will sacrifice for the rights of students, we have learned a lot from the previous leadership and we will take from where they left. We call upon all students and progressive forces to assist us because this task is not easy, however, we are encouraged and motivated by what was achieved by the previous leadership” said the students union President.

Additional members of the new Executive include Phinda Magagula from the ESwatini College of Technology(ECOT) Sikhanyiso Dlamini from the Limkokwing Univesity of Creative Technology(LUCT), Mancoba Motsa and Mahle Maseko from the University of Eswatini(UNESWA).

Others are Sakhile Nxumalo from the Southern African Nazarene University(SANU) and Mpendulo Dlamini from Limkokwing University of Creative Technology.

In an previous interview with this publication, Simphiwe Dlamini told this publication that as the students union, they will work towards making sure that all students get scholarship adding that there was clear evidence that the country had more money that was even used to construct hangars for the King’s private jets worth E230million. 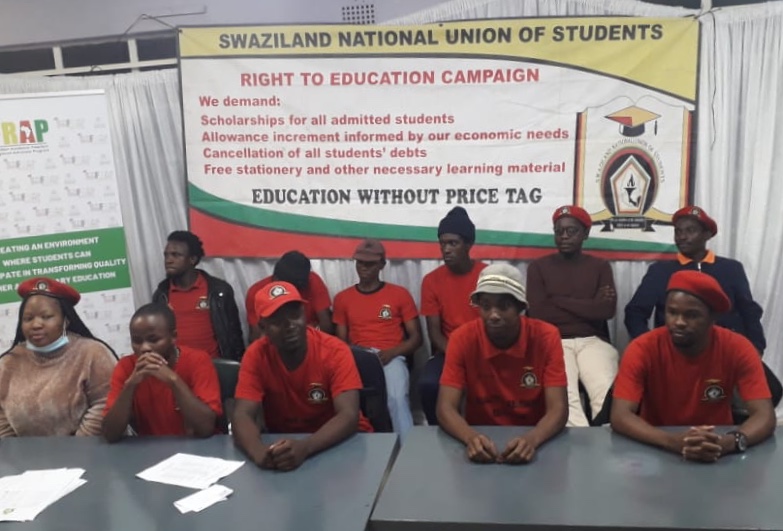