MBABANE: Sikelela Dlamini, the Secretary General of the Swaziland National Association of Teachers (SNAT) said the search warrant that gave police powers to raid his home will motivate him and the entire Executive to organize more strikes for the Cost of Living Adjustment(COLA).

Speaking to this Swaziland News, Dlamini said he was not politically blind that he cannot see the game played by the government to intimidate them so they can stop pushing for the COLA.

“Now that they have done this, they must expect more strikes this year, we won’t be intimidated by the raiding, what is needed here is money and we will push very hard to make government give teachers their Cost of Living monies. I was in town during the festive season and I never met any teacher doing shopping and this shows that the buying power has declined, teachers are broke,” said the SNAT Secretary General.

Dlamini wondered why government was using the police to target him as he was not demanding COLA for himself but pushing the mandate of teachers.

“I am pushing the mandate for teachers who are demanding their COLA from the employer and nothing will intimidate me, we need the money,” he said.

Recently, Deputy Prime Minister Themba Masuku locked horns with SNAT President Mbongwa Dlamini over an end of year statement where his organization vowed to take the struggle to the enemy’s doorsteps. Speaking in the national radio, Masuku accused the SNAT President of personalizing the COLA issue saying “Government and civil servants disagreements on the issue doesn’t mean they were enemies”

When asked by this publication to clarify his comments on the radio, the DPM said there was nothing wrong with him expressing his views on a statement that was subject to public scrutiny.

“Once something is in the public domain, it then becomes subject to public opinion and we should be free to comment the way we feel. The reason I directed the comments to Dlamini is that he is the one who issued the statement on behalf of teachers organization, it’s not like it was released by a SNAT choir. I was clarifying that government and SNAT are not enemies, we must engage each other and not fight. This is a very important organization that takes care of our children and we must be free to express our views about it,” said the DPM.

But SNAT President, when responding to questions from this publication, said the DPM literally abused the national radio to personally attack him for a statement that belonged to the teachers’ organization.

“The DPM attacked me over the word ‘enemy’ that was used in the statement and the radio station did not contact us to clarify this, however, we stand by the statement. If government is depriving teachers better living conditions, then there is no other word that we can use, because surely government is the enemy of teachers. That word was not used by mistake and we stand by our statement. The DPM even said our statement does not reflect the aspirations of our members and we wonder how a person like DPM could understand democratic principles because in the position he holds, he represents one person not the people. We are representing teachers and our mandate is measured by the numbers that respond to our meetings when we discuss these issues, can the DPM tell us who he is representing ?” The SNAT President said.

The tension between government and civil servants escalated after the former PM refused toward Cost of Living Adjustment(COLA) for three years. As the workers were demanding COLA from government, royalty purchased vehicles over E500million triggering political tension even among political parties who declared that the social and economic challenges were as a result of King Mswati’s extravagant spending. 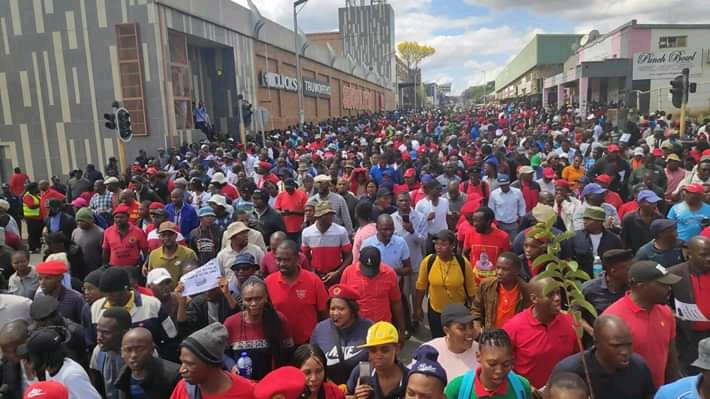 Protesters during a protest recently