MBABANE: King Mswati has purchased about 100 BMWs that will cost taxpayers over E250million, these vehicles would used as escorts for the entire royal family.

Government Spokesperson Percy Simelane when reached for comments by this Swaziland News, confirmed knowledge of the BMWs adding that there would a press conference today where the matter would be clarified and discussed further with the media.

Even though the multi-million vehicles were sneaked into the country on Thursday night, this publication was already in contact with South African media sources who were monitoring the movements BMWs into the country. The purchasing of these luxurious vehicles comes hardly a week after the King’s Office confirmed to this Swaziland News the purchasing of Rolls Royce cars worth about E200milllion.

The series of royal expenditure has sparked protests across in the country where about 70% of the population lives below the poverty with government refusing to award civil servants Cost of Living Adjustment (COLA). The Sowetan, a South African newspaper reported that the BMWs were transported into the Kingdom of eSwatini in twelve (12) trucks. Information gathered by this publication through independent sources suggests that the luxurious vehicles include at least 35 BMWs X7 that cost around E1.6million each, 58 BMWs 5series that will cost taxpayers around E1.6million each, 30 bikes at E660,000.00 each and 28 BMW X3s at E600,000.00 each. The collective costs of these vehicles suggest that taxpayers will fork out around E250millon from public coffers.

Chief Mgwagwa Gamedze, the Chief Executive Officer (CEO) in the King’s Office told this publication that the King never used tax-payers money to purchase these cars. The CEO was contacted last week after the delivery of Rolls Royce cars with reports emerging that more cars would be purchased by the King.

“These cars were never funded with tax-payers money but through selling old cars that were used by royalty including Emakhosikati(King’s wives). We have been making savings for these cars for a long time, we only supplemented those savings with a budget that was approved by Parliament” he said.

But Lucky Lukhele, the Spokesperson of the Swaziland Solidarity Network(SSN) said the Gamedze was lying as old cars for the royal family were never sold to fund these massive spending.

“There were no old cars sold and even if they were, they were bought with taxpayers money. It is also well-known that the King has sticky fingers that he continuously digs into the national kitty whenever he needs something despite the obscene E1.3billion($80 million)” said the SSN Spokesperson.

Wandile Dludlu, the Secretary General of the People’s United Democratic Movement(PUDEMO) said it was surprising that the continuous massive spending  by the King comes at the time when the health system had totally collapsed thus rendering the poorest of the poor vulnerable. In a statement, Dludlu also touched on the issue of tertiary institutions that closed down due to government failure to pay students their tuition fees.

“in the midst of all these self-inflicted crisis, the shameless King Mswati continues to spoil himself  and his family, totally oblivious to the myriad of problems afflicting the people he claims to lead” said PUDEMO Secretary General.

Sikelela Dlamini, the Secretary General of the Swaziland National Association of Teachers(SNAT) said the King was now proving to anyone that there’s money in the country but it was only for himself.

“We have been demanding the Cost of Living Adjustment when we decide to go on strike but it seems what is needed now is a national strike to demand power. The problem with a national strike is that it might end once the power has been handed over to the people” he said. 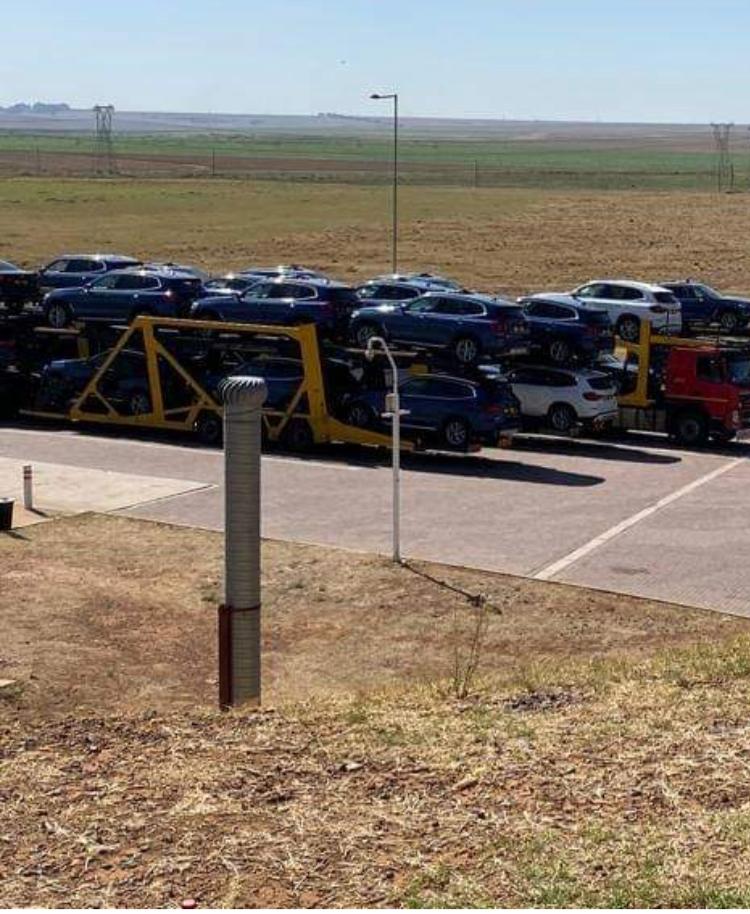 King Mswati's BMWs being transported to the country from South Africa.