MBABANE: Public Sector Associations(PSAs) want government to award at least 6.7% Cost of Living Adjustment(COLA) for civil servants that should be backdated to 2017, the 3% has been vigorously rejected.

Speaking to this Swaziland News, Sikelela Dlamini, the Secretary General of the Swaziland National Association of Teachers (SNAT) said they have requested the Government Negotiating Team (GNT) to report back to their principals regarding the demand.

\"We are demanding a 6.7% Cost Of Living Adjustment that we believe should be backdated to 1st April 2017.Goverment on the other hand is offering a 3% COLA only for this financial year (2020/21) yet our salaries have been stagnant for the past four years.We have since requested the Government Negotiating Team (GNT) to report back to their principals to recharge their mandate.Hopefully they will come back with a rational offer when the JNF resumes on 13 May 2020\" he said.

In a press statement releaseddated O6 May 2020, the SNAT Secretary General Sikelela Dlamini stated that the GNT should report to Cabinet that the offer has been rejected.

\"The Joint Negotiations Forum (JNF) was convened today (06-05-2020), the meeting resolved that the Government team should revert back to their Principals (cabinet) to recharge their mandate. This followed that the PSAs stated categorically clear that they cannot waste time and deliberate on an offer that is meagre as 3%, particularly because this is the fourth financial year since government employees were last awarded a Cost  Of Living Adjustment,\" reads the statement in part. 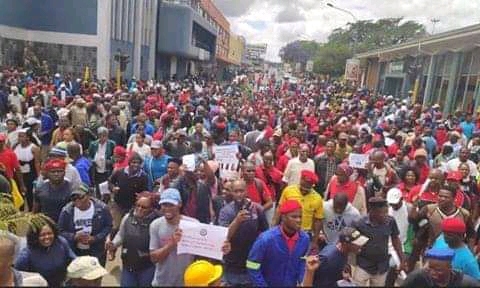 Civil servants during a protest march